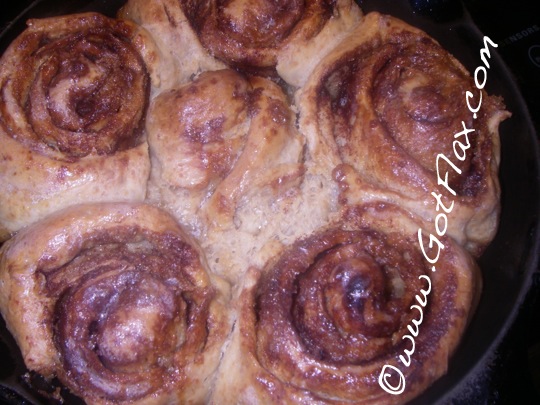 They are more amazing than store bought cinnamon rolls -not only because you made them yourself, but because the flavor is so much more rich and delicious!

To Make the Dough:

Be sure the mixture is not too hot, then sprinkle 2 Tablespoons yeast on top and let the sugar start to work on the yeast for about 3 mins when it starts to look bubbly.

Add to the mixture:
2 eggs

Then slowly add, while still mixing:
3/4 cup Flakes o' Gold or Ground Premium Gold Flaxseed
1 cup of flour at a time until the goal of 3 1/2 cups.

1. Kneed the dough (folding it over itself and just mixing it well) for about 60 times -more is better to help the yeast be mixed throughout and start working on the dough.

* The key to great dough is: You want your dough to be sticky.

3. When this is done, punch the dough down, and kneed about 30 times. 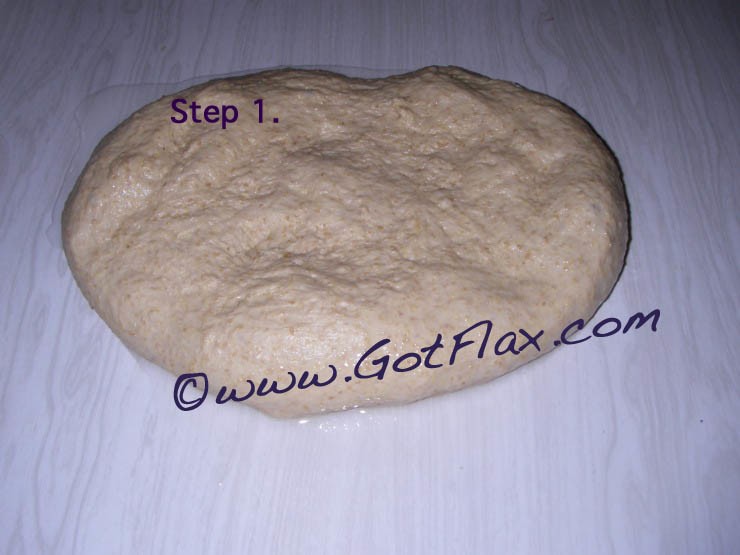 Step 1. Get the dough that has risen, kneed it a couple times and prepare a surface to roll out the dough.

Use oil or flour as the surface. 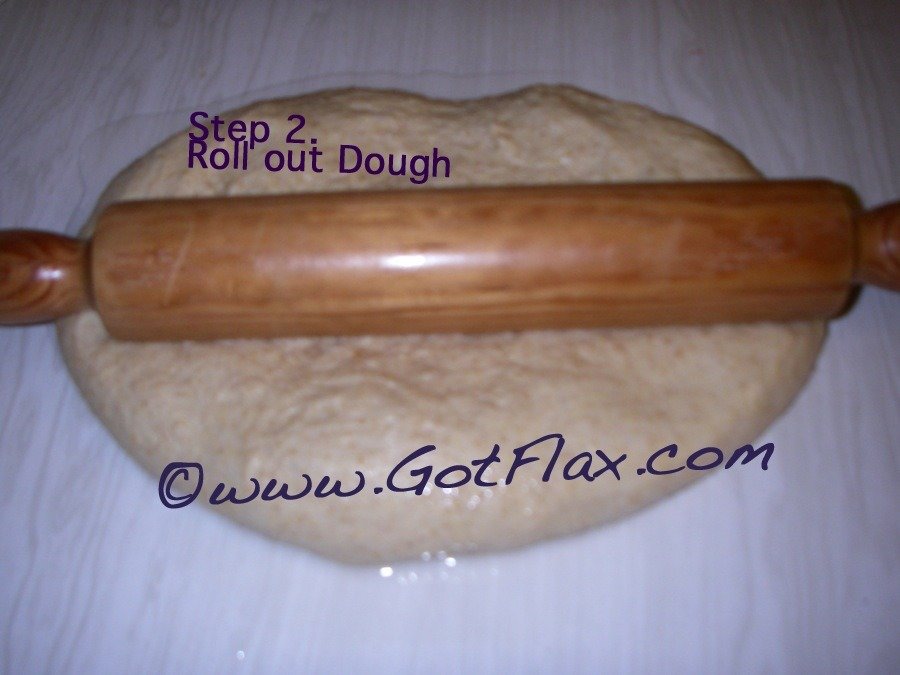 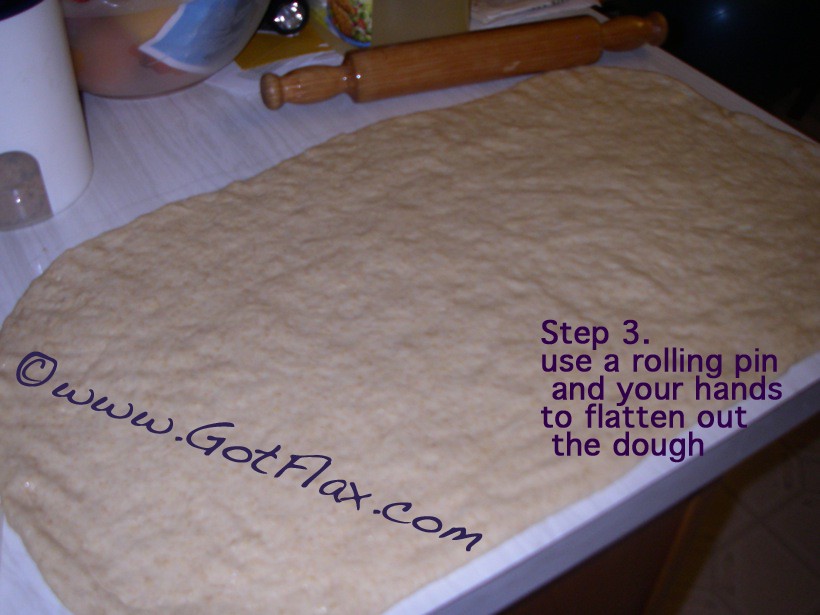 The wider you roll out the dough, the bigger around the cinnamon rolls will be. 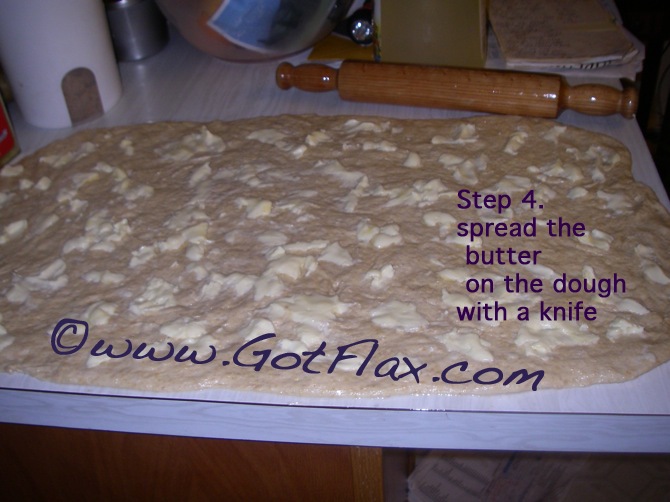 Step 4. Spread the butter over all the rolled out dough. If it is
too hard, warm the butter in the microwave or use a knife to slice pieces of it everywhere. 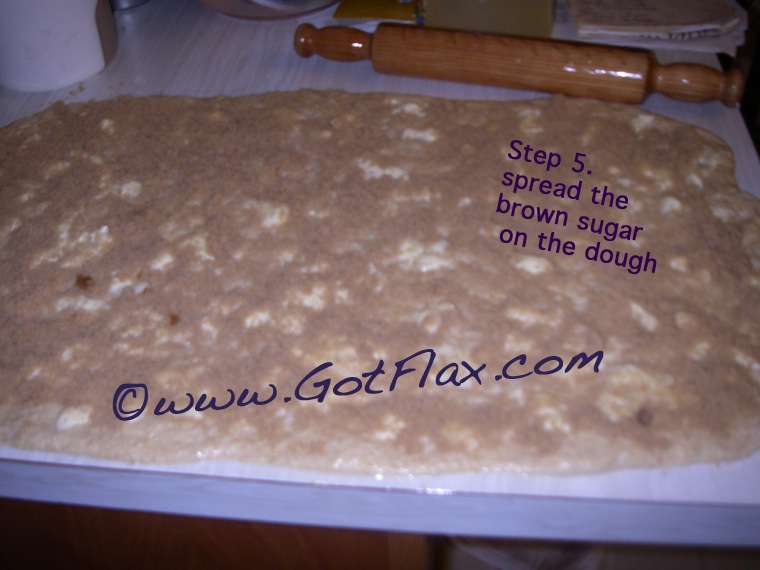 Step 5. Sprinkle the brown sugar over the butter. 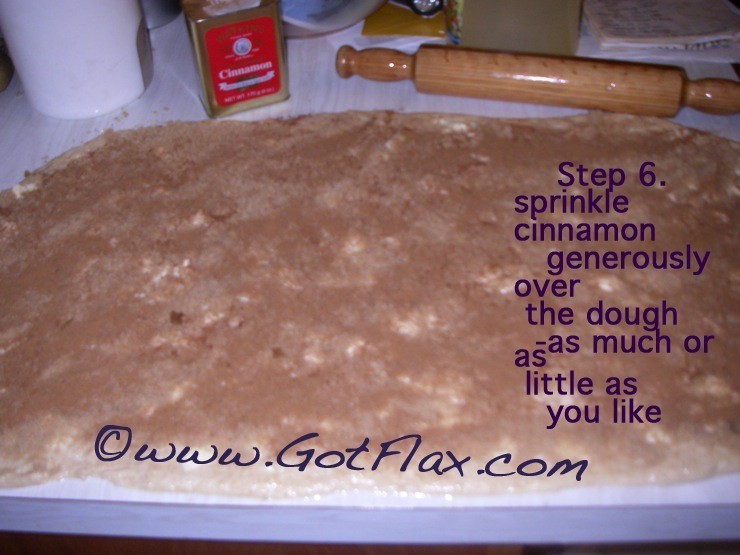 Step 6. Sprinkle the cinnamon over the sugar -less or more depending on your love of cinnamon. -Cover all the dough. 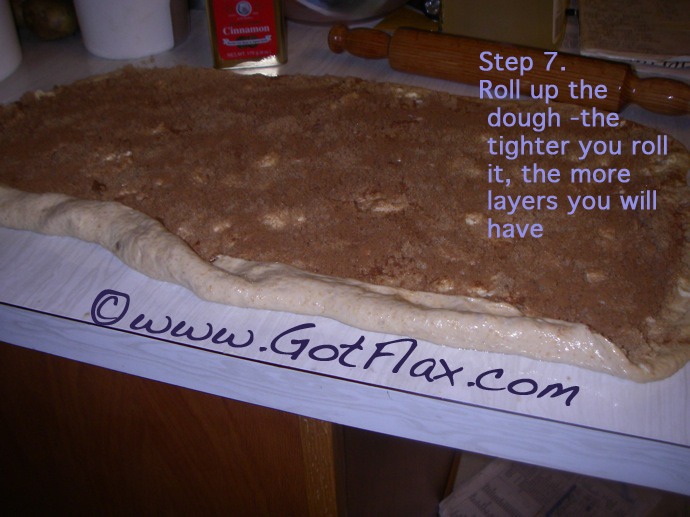 Step 7. Roll the dough up 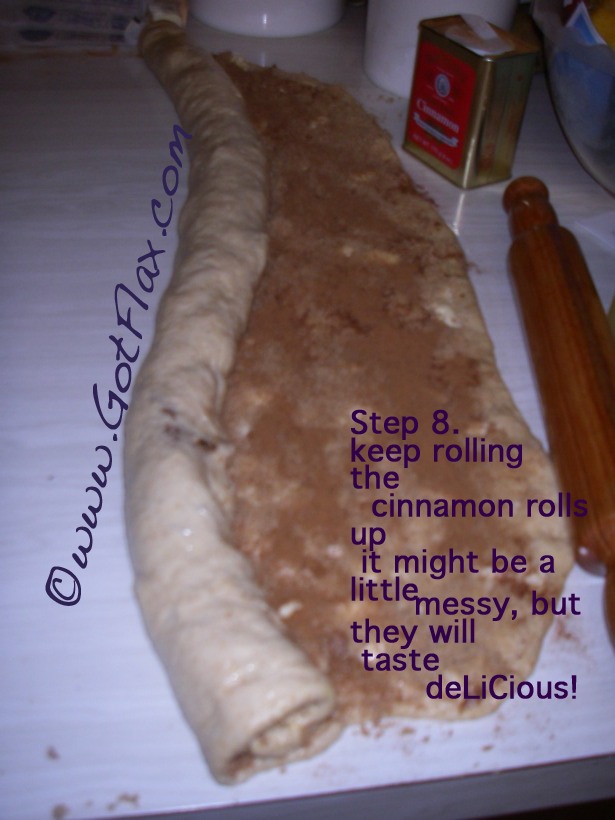 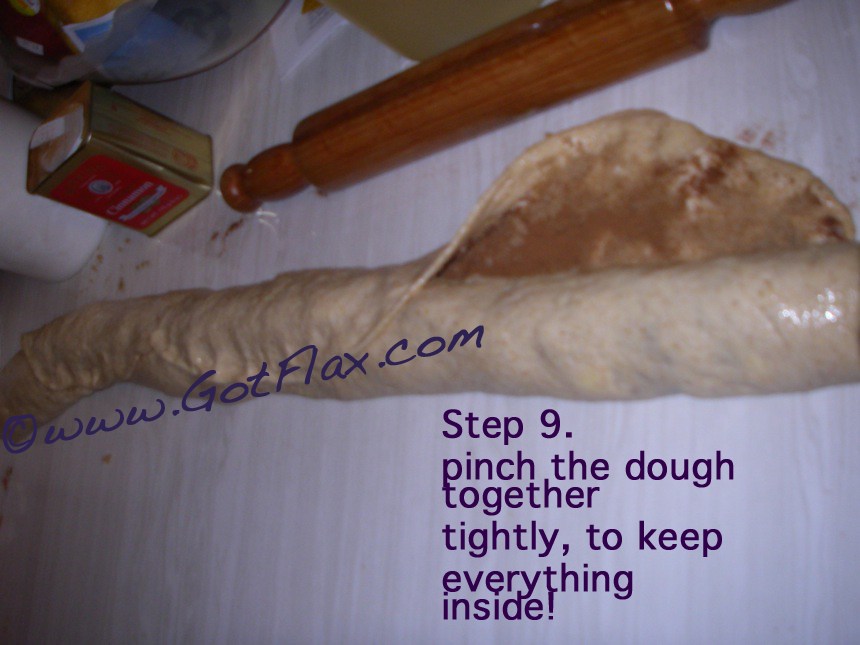 Step 9. Pinch the dough together tightly, to keep everything inside! 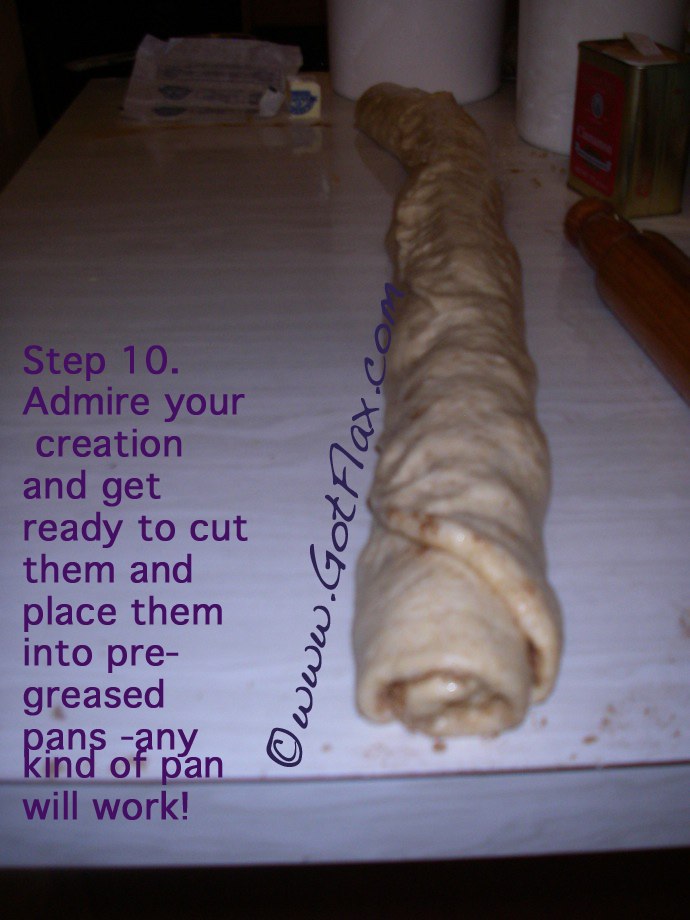 Step 10. Admire your creation and get ready to cut them and place them into pre-greased pans -any kind of pan will work! 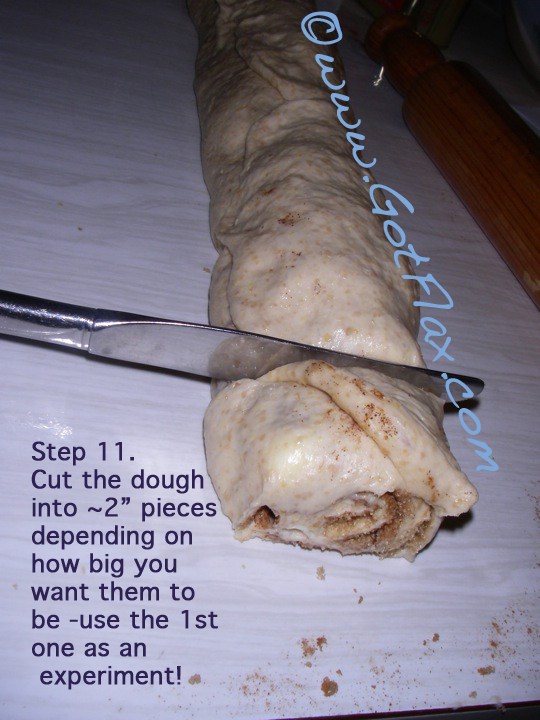 Step 11. Cut the dough into ~2" pieces -depending on how big you want them to be -use the first one as your experiment.

*Tip: you can also use a clean piece of dental floss to cut your cinnamon rolls -slide it under the roll and place it where you want to cut and then pull and twist -Tada! :)

Remember, they will rise to about 1 1/2-2x the present size. 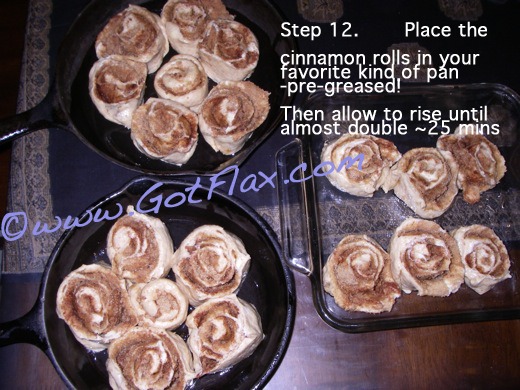 Step 12. Place them in your favorite pan to let them rise.

Bake for 45 minutes or until golden brown around edges depending on your oven! 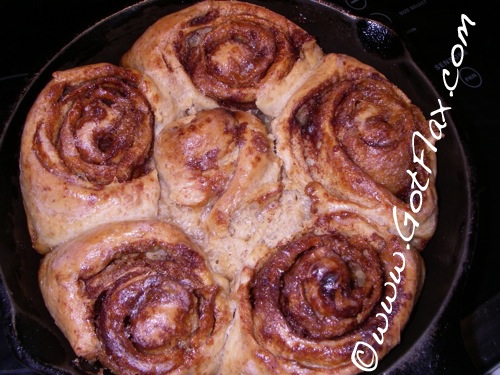 Cool on the pan for about 3 mins and then place them onto plate to finish cooling.

Drizzle with icing or leave plain.

Store in a airtight container, if they last that long!

Makes about 1 1/2-2 dozen cinnamon rolls (depending on the size you make them! :)

Your info is Private.